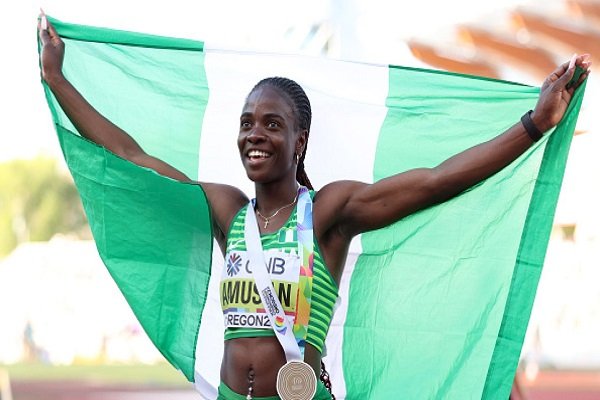 While football may be the most followed sport in Nigeria, Athletics remains arguably the most productive sport for the country on the global stage.

More than any other sport, our athletes have consistently delivered medals at global events like the Olympic Games, often sparing the nation’s blushes at such events.

In this article, we relive Nigeria’s greatest track and field moments.

We start off with the historic 4×400m team of Los Angeles 1984- the men who delivered Nigeria’s first athletics medal at the Olympic Games.

Sunday Uti ran a blistering opening leg for Team Nigeria, handing over the baton to Moses Ugbesien, and then Rotimi Peters, before Innocent Egbunike took the team home in third place behind the Americans.

Egbunike briefly had second place towards the end of the race, but Nigeria was overtaken by the fast-finishing British team as the runners approached the line.

Still, it was an excellent performance from Team Nigeria, who produced an African record that would not be broken for another 16 years.

While Egbunike and co. delivered a maiden Athletics medal for Nigeria at the Olympics in 1984, the quartet of Beatrice Utondu, Faith Idehen, Mary Onyali and Charity Opara-Thompson wrote their own piece of history eight years later in 1992.

They produced a magnificent piece of sprinting to claim the bronze medal, becoming the first Nigerian women to get a medal of any form at the Olympic Games.

France were marginally ahead of Nigeria heading into the final 100m, but Onyali charged through the final leg to pip the French to the post, sending the Nigerian quartet into delirium in one of the most enduring images of the Olympic Games.

When Enefiok Udo-Obong took the baton from Sunday Bada for the anchor leg at the 4x400m men’s relay final at Sydney 2000, Team Nigeria was in fourth place and not given much of a chance to get a medal.

And while American great Michael Johnson galloped through to victory for the USA, the real race was unfolding behind him, with Udo-Obong producing a performance for the ages to overhaul the Jamaican and Bahamian anchors for the silver.

It was Silver on the night, but 12 years down the line, the medal was upgraded to gold after a member of the American quartet admitted to taking performance enhancing drugs during that period.

In the lead-up to the 2022 World Athletics Championships in Oregon, USA, Tobi Amusan had been one of Nigeria’s most consistent athletes; arguably our brightest medal hope at the event.

And she delivered in stunning style in Oregon, blitzing the world record to become Nigeria’s first gold medallist in the history of the World Championships.

While Amusan was seen as a genuine medal prospect, not many expected her to decimate a high-quality field and storm to gold. Betking, one of the best betting sites in Nigeria, gave Amusan massive odds of 12 odds to win the world title!

Amusan smashed the world record in the semi-finals with her time of 12.12seconds, before going even quicker in the final, hurtling and hurdling to victory in 12.06 seconds. Unfortunately, her time in the final wasn’t recognised as it was produced with an over-the-limit wind behind her.

Still, that took nothing away from a sensational performance- easily one of the finest in Nigeria’s storied athletics history.

Chioma Ajunwa produced arguably Nigeria’s greatest moment in global Athletics when she leapt to Gold in the long jump event of the Atlanta 1996 Olympic Games.

In the process, she became Nigeria’s first ever Olympic Gold medallist (beating the men’s U-23 football team to the punch!), with a stunning leap of 7.12 seconds.

The incredibly multi-talented Ajunwa, who had previously represented Nigeria’s Super Falcons at the Women’s Football World Cup 1991, will forever be remembered as one of Nigeria’s and Africa’s greatest Olympians.

Is Eddie Howe an uninspiring appointment by Newcastle United?
5 most noticeable football scandals of all time
Convenient betting with the 1xBet mobile app
Today live socer and past Bayern Munich Bundesliga games
Top 8 players who played for several big clubs in their career
30 Best EDC Knives 2021 | What is the best Every Day Carry Knife?
The Major Outlook of the Sports Industry in 2022
Try online sports betting on certified site 1xBet
Your ultimate baseball betting guide
4 Alternative Ways to Enjoy Soccer
15 Best Rowing Machines under $500 for Home and Professional Use
Ferventoys Reviews, is Ferventoys legit? - Ferventoys discount codes - www.ferventoys.com
Spread the love

EasyInfoBlog is a multi-author blog. We have experts and professionals in various fields who share their ideas and expert knowledge to help you with your daily information needs. Thanks for reading!