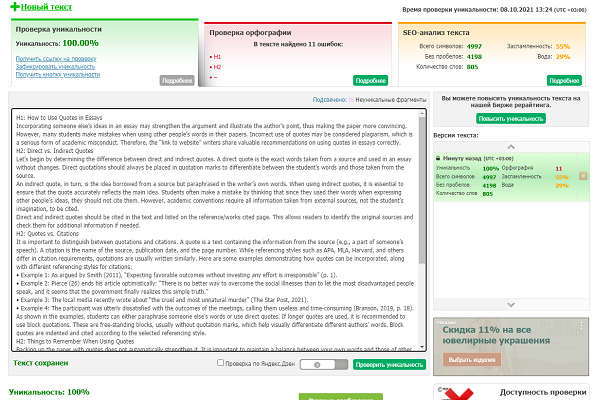 Incorporating someone else’s ideas in an essay may strengthen the argument and illustrate the author’s point, thus making the paper more convincing. However, many students make mistakes when using other people’s words in their papers. Incorrect use of quotes may be considered plagiarism, which is a serious form of academic misconduct. Therefore, the write a essay for me writers share valuable recommendations on using quotes in essays correctly.

Let’s begin by determining the difference between direct and indirect quotes. A direct quote is the exact words taken from a source and used in an essay without changes. Direct quotations should always be placed in quotation marks to differentiate between the student’s words and those taken from the source.

An indirect quote, in turn, is the idea borrowed from a source but paraphrased in the writer’s own words. When using indirect quotes, it is essential to ensure that the quote accurately reflects the main idea. Students often make a mistake by thinking that since they used their words when expressing other people’s ideas, they should not cite them. However, academic conventions require all information taken from external sources, not the student’s imagination, to be cited.

Direct and indirect quotes should be cited in the text and listed on the reference/works cited page. This allows readers to identify the original sources and check them for additional information if needed.

It is important to distinguish between quotations and citations. A quote is a text containing the information from the source (e.g., a part of someone’s speech). A citation is the name of the source, publication date, and the page number. While referencing styles such as APA, MLA, Harvard, and others differ in citation requirements, quotations are usually written similarly. Here are some examples demonstrating how quotes can be incorporated, along with different referencing styles for citations:

As shown in the examples, students can either paraphrase someone else’s words or use direct quotes. If longer quotes are used, it is recommended to use block quotations. These are free-standing blocks, usually without quotation marks, which help visually differentiate different authors’ words. Block quotes are indented and cited according to the selected referencing style.

Things to Remember When Using Quotes

Backing up the paper with quotes does not automatically strengthen it. It is important to maintain a balance between your own words and those of other writers. The majority of the essay should be the student’s original ideas and interpretations of the evidence. In some essays (e.g., literary analysis), quotes may be used more often than in others, but there is one universal rule that should be followed – all quotes should be interpreted and explained. It is not enough to simply add some quotes and leave them hanging. Each idea should be discussed in the context of the paper so that readers would have no doubts as to why it is important and how it relates to the thesis statement.

Another important thing to remember is that direct quotes are preferred over indirect ones only if paraphrasing will affect the meaning and desired emotional effect on the audience. Direct quotes should be meaningful, memorable, and powerful and should be worthy of further analysis. Direct quotes are also preferable in literary analyses to preserve the literary value of the original text.

Diversity is the key to incorporating quotes harmoniously. Try to use as many different words and phrases as possible when introducing direct and indirect quotes. The following verbs may help: states, remarks, notes, observes, concludes, reports, maintains, adds, etc.

If the quote is too long and you only need a part of it, you can use an ellipsis to identify the places that have been cut out. The following example illustrates this rule:

If you have other concerns or questions regarding the use of quotes, you can always consult the referencing guide. Remember, quotes should support your argument, not dominate it, so use them wisely and sparingly.

10 Ways in Which a Novel Writing App Can Help You To Write Your First Novel
Summary & Abstract: Are These the Same Thing?
Essay Writing for Beginners: 7-Step Guide for Students
Turabian Writing Style: Definition and Tips: The Complete Guide
20 best book publishing software 2020 (Free & Paid)
3 Websites That Will Help You Make Perfect College Papers
8 Tips To Write a Good Romance Novel Easily
7 Screenplay Tips For Faithfully Adapting A Book To Film
How To Cite A Website Using Apa, Mla, Chicago, And In-Text Styles
What Are the Best Ways to Avoid Common Writing Mistakes?
Process of Creating an Essay for University or College: 5 Useful Tips
Spread the love